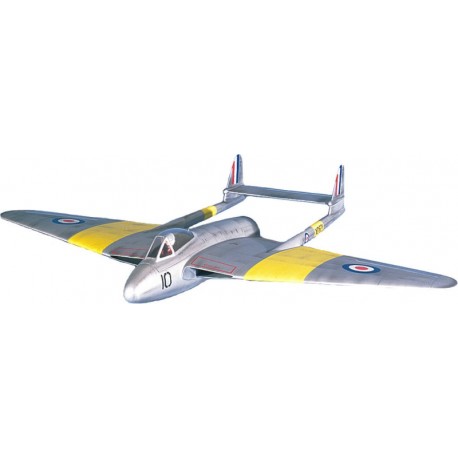 De Havilland D.H. 100 "Vampire" was developed during the Second World War and already completed its first flight in September 1943. But there was no longer a chance for war. Nevertheless, the jet hunter, with the characteristic 'double hull in military circles, attracted considerable attention. This had the consequence, among other things, that as early as 1949 the Swiss Air Force deployed 75 copies (later another 100). They were used as interceptors, later, after conversion, also for ground combat purposes. From 1966 the "Vampire" served to train federal military pilots. The last copies were only sold to private customers in 1991.

As jet from the pioneering days of the jet drive, the D.H. 100 is an outstanding example for an aircraft model with an electric impeller drive. Thus the short beam guidance allows a high drive efficiency. Thanks to the comparatively large wing area, the surface loading of the model remains within limits. Due to the middle decker configuration, the model can be carried into the air by hand (sensibly with the help of a rubber cable) and safely landed on the "belly".

As a drive, fancies are suitable for up to 90 millimeter rotor diameters, e.g. "Aero-naut" Turbo Fan 1000. In order to be able to achieve the corresponding flight performance, it is advisable to use a high-quality electric motor with SE magnets, e.g.

In this case, appropriate drive accumulators are used depending on the requirements of the flown properties.

The modular system impresses with its high degree of prefabrication. Central hull, wing center part as well as both tailpipes, including tailpipes, are made "in one piece" out of white colored GfK, the outer surfaces are made of light Styro-Balsa. Due to its compact dimensions, the "Vampire" can be transported undecorated.