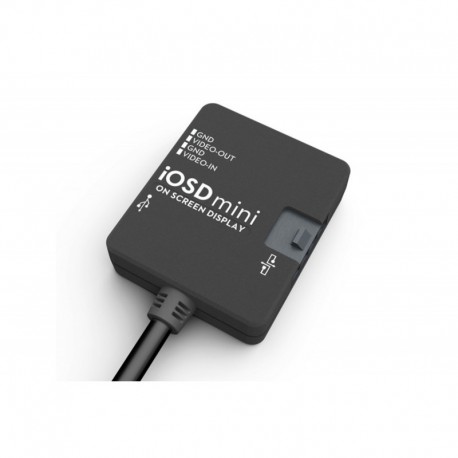 The DJI iOSD Mini On Screen Display is specially designed for a DJI autopilot system and it should be used with either WooKong-M, Naza-M or Naza-M V2. It can transmit video and iOSD information in real-time, which will help you to obtain the aircraft status information during first-person view (FPV) flights. The iOSD Mini can display multiple flight information specs including power voltage, flight velocity, height, distance from the home point, horizontal attitude, GPS satellite number and more. The iOSD will even superpose this data onto the video, so the iOSD data is clearly visible.

Conveniently, the iOSD Mini is compatible with both NTSC and PAL video source inputs. You can also use an R/C transmitter switch to remotely select which video source input you want to use. The R/C TX switch will change the wireless video transmitter channel remotely as long as you're using a video transmitter specified by DJI. Plus, you can achieve double video alternation during flight by setting one video mode for the aerial camera and the other for the FPV.

- Supports DJI Professional Autopilot Systems
For improved flight performance, the iOSD Mini should be used in conjunction with one of the DJI autopilot systems, such as WooKong-M, Naza-M or Naza-M V2. Based on DJI's accumulation of historic and reliable information integration technology, the iOSD Mini can grab the most accurate first-hand flight data information in the shortest amount of time.

- Double Video Source Inputs Are Switchable During Flight
The iOSD Mini supports both NTSC and PAL video input sources. It automatically recognizes which source you're using and you can also select which input source you want remotely using an R/C transmitter switch. By doing this, the pilot can achieve double video alternation during flight and can also set one video input source for the aerial camera and the other one for FPV. This will ensure that the nose direction of the aircraft is under control and that your aircraft will safely return after filming sessions.

What's Included With This Item