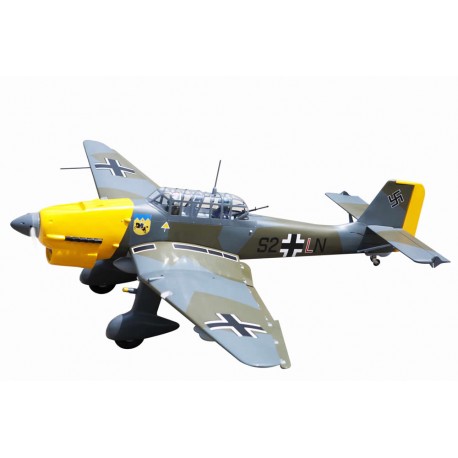 The Junkers Ju 87 or Stuka was a German dive bomber and ground-attack aircraft designed by Hermann Pohlmann and first flew in 1935 and made its combat debut in 1937 with the Luftwaffe's Condor Legion during the Spanish Civil War. It served the Axis forces in World War II. The aircraft was easily identifiable by its inverted gull wings and fixed spatted undercarriage. Upon the leading edges of its faired main gear legs were mounted the Jericho-Trompete wailing sirens, becoming the propaganda symbol of German air power and the blitzkrieg victories of 1939–1942. The Ju 87 operated with considerable success in the close air support and anti-shipping at the outbreak of World War II.

The famous german WW2 dive bomber, has been produced this year in giant scale by Seagull Models. They have not failed to impress us once again with remarkable models like this JU-87 Stuka Giant Scale 40-50cc with a wingspan of 2286mm, Seagull's version of this legend shares an amazing presence with all it's unique details like dive brakes, semi-floating flaps and ailerons, dive siren, tail bracing, balanced elevator detail, glass house cockpit with rear machine gun, and so much more. As all other Seagull models, it is wrapped with the Oracover and suitable for 38-50cc engines. Beautifully produced and finished with superb flying characteristics, this model is highly desirable and will definitely be at the center of attention.