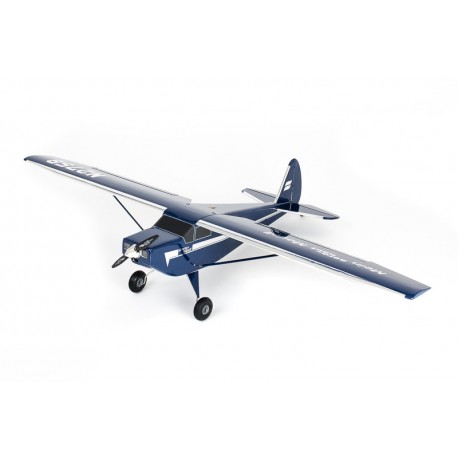 It was a sensation when the Luscombe Model 8, later to be called Silvaire, was released as a two-place light plane. The Silvaire had a monocoque dural structure and was well ahead of its time. Over time the Silvaire experienced various changes and upgrades until it reached its final stage when the wing was redesigned to an all-metal monocoque design in 1946. Another novelty was the completely enclosed horizontally opposed engine in the Silvaire. Other manufacturers were soon to incorporate in their own designs these technical features developed by Luscombe.

Our model of the Silvaire has definitely been influenced by the original design. The monocoque fuselage uses balsa wood for low weight and good surface quality and incorporates with well-placed reinforcements where necessary. These design principles are the same for empannage and wings. The wings connect to the fuselage by means of carbon rods and re easily detached for transport.

All parts are laser-cut and feature interlock construction to avoid mistakes during building. Comprehensive step-by-step building instructions are the standard for aero-naut models and the Silvaire is no exception. Due to its size and the number of parts the Silvaire is not exactly a beginner’s model. But with a little help from a more experienced modeller even the talented novice will be able to build his Silvaire.

The good handling characteristics make the Silvaire an ideal trainer, just like the original. Yet it stands out from the crowd by its scale appearance, which may also make it an interesting model for the more experienced modeler who enjoys the special design of the Silvaire.

We recommend outrunners with an output of approximately 350 Watts, 4s LiPos with a capacity of 3.000 mAh and an aero-naut Power Prop 12×7 or 11×8 for easy take-off and economical flying.