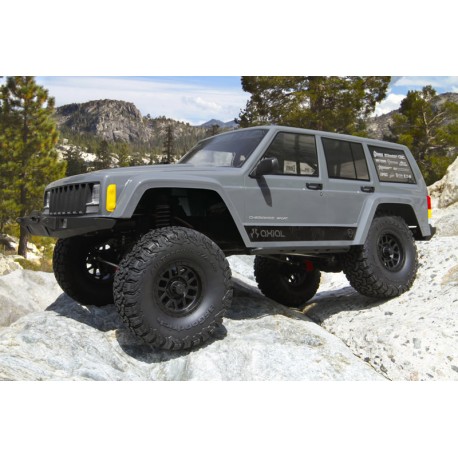 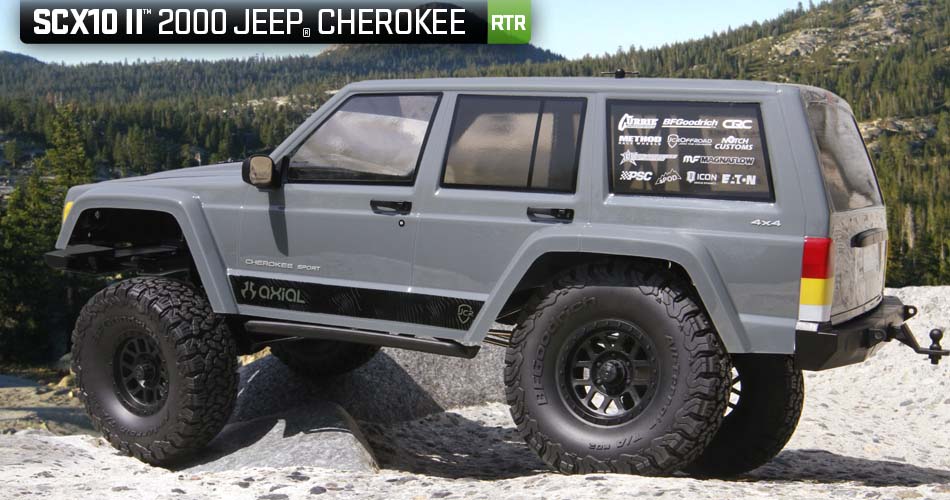 The SCX10 has been the vehicle of choice for scale trail fun! For the past 8 years the SCX10 has been the staple vehicle platform for scale trail enthusiasts around the world. Axial was one of the first companies to embrace R/C rock crawling and the first to mass produce a scale trail truck. Axial has been watching trends, tirelessly testing, and experimenting to create the next evolution of the SCX10. The SCX10 II is the culmination of many years of development, furthering aesthetic realism while maximizing trail performance. The next generation of SCX10 is here!

While developing the next iteration of axles such as the AR60, we started thinking about what kind of axle would be more suited for the future of the SCX10. Our design of a new axle needed to feature three key points. First, we wanted the axle housing to visually quench the thirst of scale enthusiasts. Second, we needed to create a gear set with the technical attributes to overcome the torque twist that is often associated with smaller gear sets. Third, the axle itself needed to be durable.

After seven years of utilizing the original AX10 axle and two years of development, Axial is proud to introduce the industry's first high pinion gear set in our newly developed AR44 axle! The next chapter of the Axial SCX10 begins with true technological engineering and scale realism!

AR44 HI-PINION AXLES
In 2008, the AX10™ axle was used in the launch of the SCX10™ chassis platform. While developing the next iteration of axles such as the AR60, the thought process began on what kind of axle would be best for the future of the SCX10™. Axial’s development of a new axle needed to feature three key design points. First, an axle housing to visually quench the thirst of scale enthusiasts. Second, a gear set with the technical attributes to overcome the torque twist often associated with smaller gear sets. Third, the axle itself needed to retain the durability associated with the SCX10™, despite being delivered in a smaller axle housing. After seven years of utilizing the original AX10™ axle and two years of development, Axial is proud to introduce our newly developed AR44 axle with the industry's first high pinion gear set. The next chapter of the Axial SCX10™ begins with scale realism backed with true technological development!

KINGPIN ANGLE
The AR44 axle was designed for both aesthetics and functionality. To improve upon the older AX10 axle, we designed the steering components with an 8 degree kingpin angle which results in a positive scrub radius. Making this change to the pivot point means less tire scrub for steering efficiency and less load on the steering servo. 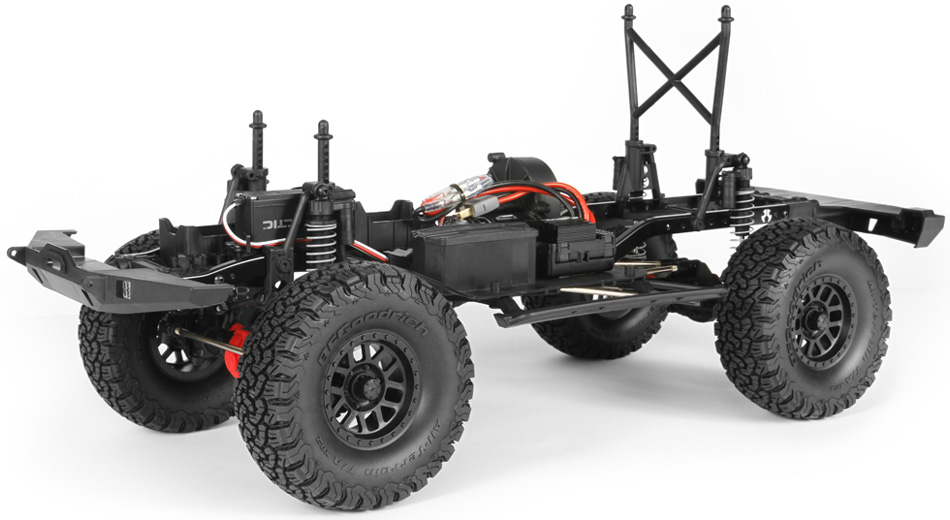 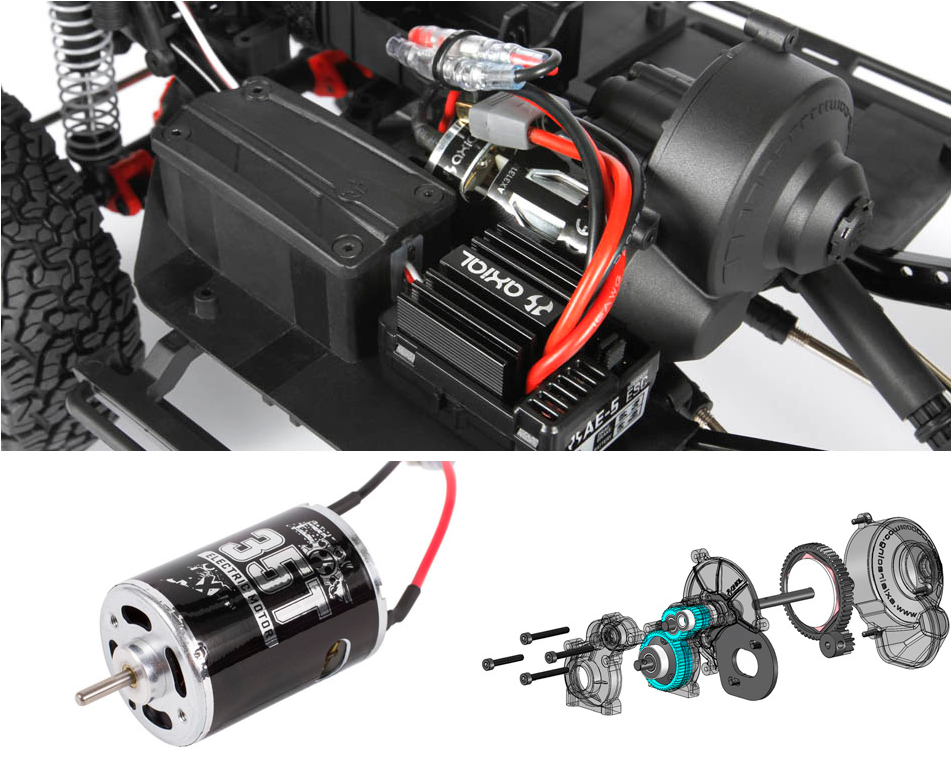 • Adjustable tray that prevents the battery from coming loose or shifting while driving
• Posts are included to fine tune the fit based on the battery you choose
• Easy access for quicker battery changes
• Can accommodate batteries up to 32x44x147mm (3S 5,000 mAh)

STEEL C-CHANNEL FRAME RAIL CHASSIS
The realistic high strength c-channel chassis frame is made of durable steel with cross bracing for reinforcement and is held together with all hex hardware. Realistic looking frame and cross braces improve chassis rigidity (torsional stiffness). Realistic shock hoops with multiple shock mounting positions allows you to adjust your suspension for maximum performance. The simplified design makes maintenance and assembly quick and easy. The contoured skid plate significantly reduces hang-ups on terrain. Compared to the previous design, additional holes have been added to the rear portion of the frame rails for making wheelbase adjustments.

ADJUSTABLE WHEELBASE
This chassis is designed at 12.3” wheelbase length, but is easily adjusted to either a 11.4” or 12.0” wheelbase (optional link kits sold separately). Axial designed the chassis so that all the wheelbase adjustability happens out back without sacrificing front-end suspension geometry. Simple removal and installation of the suspension links and changing the drive shaft length allows an easier way to adjust the wheelbase.

Throughout the rich history surrounding the Jeep® brand, there have been several influential vehicles hailing from the seven-slot stable, one of which is the Jeep® Cherokee (XJ). Possibly considered as the dawn of the modern SUV, the XJ was first presented 1984 as one of the first small SUV’s introduced into the American market, which carried on until 2001. During its 17yr production run, the XJ was built on several continents for world wide exposure, offered in either a 2-door or 4-door configuration, available in several different trim levels along with either a 2wd or 4wd drivetrain. Under the hood featured three different engine options consisting of 2.5L I4 AMC (125hp @ 5400rpm and 150lb/ft of torque @ 3250rpm), 4.0L I6 OHC AMC (193hp@4600rpm and 231lb/ft of torque @ 3000rpm), and a Euro spec only turbo diesel I4 OHV (114hp@3900rpm and 221 lb/ft @ 2000rpm). In 97’, the XJ received a facelift that updated design queues focused on aerodynamics, body stiffness, styling as well as the spare tire being relocated from the rear bumper to inside the cab. The stiffer uni-body construction brought forth improvements in noise cancellation and vibrations while aerodynamics improved engine efficiency.

From an off-roading perspective, the XJ has proven to be a relatively inexpensive vehicle for purchase thus making it a value based build option, capable of suiting just about any sort of budget. Its bones are strong thanks to a Quadra-Link suspension system and primarily coming with Dana 35 axles since the beginning, but there was a Dana 44 option between 87’-91’. Don’t let its smaller size fool you, there’s room for four passengers and space for days, making it a great expedition rig for friends and family to tag along.

RECEIVER BOX, WATERPROOF
Three different silicone seals are included, one for the antenna, one for the servo wires (includes three slots for three channels), and one that acts as a gasket for the receiver box cover. No more stress when running in mud, water, or snow!

WIRE ROUTING
Wire routing has been thoroughly thought through to help keep your chassis layout looking clean. In addition to including wire clips/guides, there has been a channel created that runs the length of the chassis so you can run additional wires hidden inside the c-channel frame.