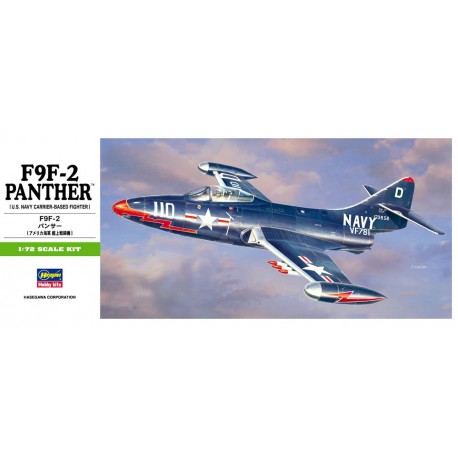 Grumman's first jet fighter, the F9F Panther was introduced in November 1947, but it wasn't until May 1949 that the first production models were delivered to the Navy's Fighter Squadron (VF) 51. The Panther saw its first combat on 3 July 1950, flying strikes from USS Valley Forge (CV-45). During the Korean War, the F9F was used extensively by both Navy and Marine squadrons, notably scoring the first jet vs. jet kill in U.S. Navy history on 9 November 1950. The Panther on display served with both Navy and Marine squadrons in Korea.

Grumman's entry to the jet age occurred in April 1946, with a Navy contract for a new night fighter. The company's G-75 design, soon to be designated XF9F-1, was delayed by the lack of an adequate power plant, with Grumman finally deciding to employ the successful Rolls Royce Nene engine, initially rated at 5,000 lb. static thrust. Changes in the original G-75 design produced the XF9F-2, a single-engine day fighter, first flown in November 1947. Several different power plants were tried, with the company settling on the Pratt & Whitney J-48-P6A and later, the P8 engine in the upgraded F9F-5.