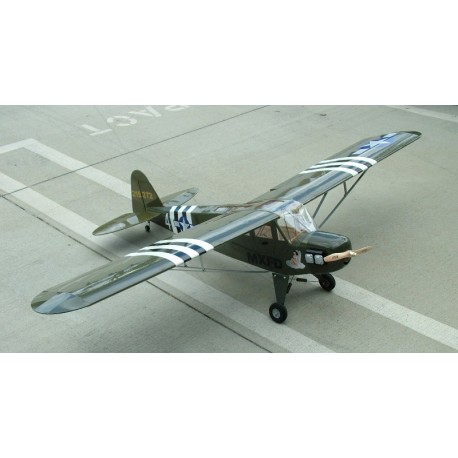 The Piper J-3 Cub is a small, simple, light aircraft that was built between 1937 and 1947 by Piper Aircraft. With tandem (fore and aft) seating, it was intended for flight training but became one of the most popular and best-known light aircraft of all time.   Piper developed a military variant variously designated as the O-59 (1941), L-4 (after April 1942), and NE (U.S. Navy). The variety of models, as well as similar, tandem-cockpit accommodation aircraft from Aeronca and Taylorcraft, were collectively nicknamed “Grasshoppers” and used extensively in World War II for reconnaissance, transporting supplies and medical evacuation. In Europe, the final dogfight of WWII occurred between an L-4 and a German Fieseler Fi 156 Storch. The pilot and co-pilot of the L-4, Lts. Duane Francis and Bill Martin, opened fire on the Storch with their pistols, forcing the German air crew to land and surrender.

After the war, most L-4s were destroyed or sold as surplus, but a few saw service in the Korean War. The Grasshoppers sold as surplus in the U.S. were redesignated as J-3s, but often retained their wartime glazing and paint. This 1/6 scale RC model airplane is improved version of previous Version 1, all made of balsa, light-ply and fiberglass.