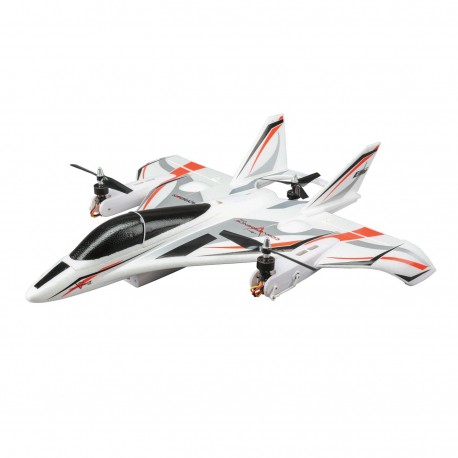 This product is no longer in stock

VTOL (Vertical Takeoff and Landing) RC models are usually a mixed bag when it comes to performance. If they are stable, their speed and agility is often lackluster. If they are nimble, pilots have to work harder to transition between hovering and airplane flight. The Convergence™ VTOL park flyer changes all that. Its unique design and exclusive flight control software give you the best of both agility and stability while making the transition between multirotor and airplane flight so smooth and predictable, you will feel right at home your first time on the sticks.

Sleek and Simple
Unlike complex VTOL aircraft that rotate the entire wing and require as many as four motors to achieve vertical and forward flight, the Convergence park flyer uses a simple, yet sleek, delta-wing design with three brushless motors – two rotating motors on the wing and a fixed-position motor in the tail.

Exclusive Flight Control Software Makes it Easy
At the heart of it all is flight control software that has been expertly tuned by designer, Mike McConville, so almost any RC pilot can experience the fun of VTOL flight.

Automated Transition
Making the transition between multirotor and airplane flight is as simple as flipping a switch. The flight controller will smoothly rotate the two wing-mounted motors into the correct flight attitude and activate the rear motor as needed.

Stability and Acro Flight Modes
These two flight modes give you a wide range of performance for every phase of flight.

- Stability Mode
In multirotor flight, Stability Mode will limit pitch and bank angles and work to keep the model level when you release the sticks. This allows you to take off and land like a pro, even if you’ve never flown a multirotor before. In airplane flight, it will limit pitch and bank angles and automatically return the wings to level when the sticks are released.

Stability Mode automatically engages during the transition between multirotor and airplane flight. It seamlessly maintains self-leveling and angle limits from one phase of flight to the other, making this the easiest RC VTOL experience you will find anywhere.

- Acro Mode
In Acro Mode there are no angle limits or self-leveling in any phase of flight. During multirotor flight, the model will behave like a conventional multirotor that pitches and banks in whatever direction you want it to fly. It can flip and roll like other multirotors, too.

In airplane flight, Acro Mode lets you perform a wide range of aerobatic maneuvers. And because you have the forward thrust of two brushless motors working for you, there is plenty of speed and power to spare. You can even use the differential thrust of the motors to perform unique spinning and tumbling maneuvers.

FPV Ready
The model is designed to accommodate several of the most popular FPV camera systems. There is a camera bay under the nose and a place to mount the video transmitter in the rear of the aircraft. Both locations are easy to access so installation takes just a few minutes.

Super-Simple Transmitter Setup
This Bind-N-Fly® version can be flown with any full-range, 6+ channel DSMX®/DSM2® aircraft transmitter and comes equipped with a Spektrum serial receiver that is connected to the flight controller. No complex transmitter setup or programming is required. You use your “GEAR” switch for selecting Stability or Acro mode and your “AUX 1” switch to transition between multirotor and airplane flight.

What's in the box?